Offered by On Locations Tours, the Sex and the City Hotspots Tour lets guests follow in the footsteps of their favorite Carrie-and-company characters featured in the iconic TV show of the same name. The tour makes stops at all the famous locations where the girls shopped, dined, gossiped and sipped cocktails, including Carrie’s famous brownstone stoop, the trendy MePa neighborhood, and more.

from Sex and the City Hotspots
Follow in the footsteps of Carrie & Co. as you visit locations from the popular TV show and movies.

Featuring over 40 locations including:
- Go on location to the trendy restaurant Buddakan where Carrie and Big had their wedding rehearsal dinner
- Take a photo in front of Carrie's famous brownstone stoop.
- Visit the Pleasure Chest where Charlotte bought her "Rabbit."
- Sip Carrie's favorite cocktail at Onieal's, the bar owned by Steve and Aidan as seen in the series.
- See the cafe where Samantha invites the girls to Abu Dhabi.
- Peek into Greenwich Village boutiques, including Marc Jacobs, Ralph Lauren, Olive and Bette, and more!
-Have some yummy cupcakes from the famous NYC bakery, as seen in the series.

On this guided 3.5 hour Sex and the City bus tour, follow in the footsteps of Carrie, Samantha, Charlotte, and Miranda – you’ll drink where they drank, shop where they shopped, and gossip where they gossiped. The sightseeing tour includes more than 40 locations from the show! Whether you’re a Sex and the City fan eager to learn more about your favorite show or a tourist looking for an entertaining way to see Manhattan’s best neighborhoods, the Sex and the City Hotspots tour is a must-do! Please note, this is an "R-Rated" tour, based on the HBO Series.

Tours take place on luxury coach buses, which are air-conditioned in the summer and heated in the winter. Buses are equipped with onboard restrooms.

Children under 12 years old, including babies, are unfortunately not allowed on the tour, as the content of the tour and several of its stops are not suitable for young children. Additionally, tour participants under the age of 17 must be accompanied by an adult of at least 18 years of age 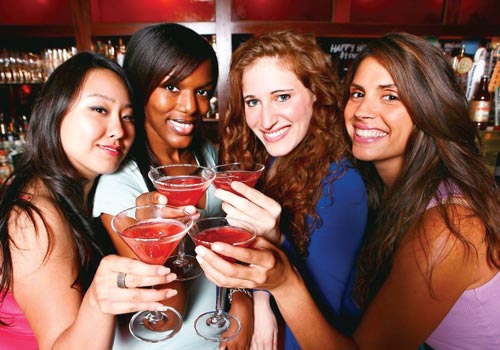 Frequently Asked Questions about Sex and the City Hotspots

Are we on the bus the whole tour?
Absolutely not. The tour takes place on a coach bus since the locations are spread out all around Manhattan. But we get off the bus at a number of locations along the way, giving you the opportunity to experience the locations and take pictures. Whenever you leave the bus, it is with the tour guide. The tour includes a mix of on-the-bus viewings of locations and stops to get off the bus to explore, all woven into the Sex and the City story by your tour guide.

What exact locations do we visit?
The exact itinerary and route of the tour varies somewhat from tour to tour, so we can't say ahead of time exactly which locations will be visited on a specific tour. There are usually 3-4 scheduled stops on each tour, including various bars, shops, and other locations - but tour routes may differ from tour to tour. You will be provided with a handout that lists many of the real-life locations on the tour so you can revisit them at your leisure afterwards.

Should I tip the tour guide?
Gratuities are not included in the price of the tour ticket. A tip for exemplary service is always appreciated, but never required.

Is there an age limit on this tour?
Children under 12 years old, including babies, are unfortunately not allowed on the tour, as the content of the tour and several of its stops are not suitable for young children. This is an "R-Rated" tour, based on the HBO series; adult language is used and adult situations discussed. Additionally, tour participants under the age of 17 must be accompanied by an adult of at least 18 years of age. Please also keep in mind that a couple of the stops on tour - a few bars and other establishments - do have their own age minimums, and it is up to the discretion of these establishments whom to allow in.

Is there ever a circumstance when a location is omitted from the tour?
While it is extremely rare, we do sometimes need to skip or modify certain locations that usually are part of the tour. Since the tour is visiting real-life locations all around Manhattan, the tour's itinerary can sometimes be impacted by traffic conditions, store hours, etc. On Location Tours assumes no liability or responsibility for: traffic conditions, access to sites, or other conditions beyond its control.

Is this also a good general New York City sightseeing tour?
Yes. While the tour's focus is first and foremost on the show Sex and the City, the tour meanders through a variety of New York neighborhoods, and people often find it to be a great overview of the city. The tour usually visits neighborhoods such as SoHo, Greenwich Village, Chelsea, the Meatpacking District, 5th Avenue and more. So even though the tour does not visit such New York sightseeing regulars as the Empire State Building, etc., it is still a great way to tour Manhattan and get to understand the city and its layout.

Can I bring some wine, beer, Cosmos, etc on the bus?
No, it is against New York State law to consume alcohol on a bus. We do usually stop at one of the bars for Cosmos though, so if you're interested in joining in, please make sure to bring sufficient cash and a valid ID.

Is alcohol included in the tour?
There will be a stop at a bar that was used in the show, where you can buy a Cosmopolitan at a discount. On Location Tours cannot include alcohol with the price of the tour, as the company does not have a liquor license.

Are the tours conducted in English only?
While we do offer a special German version of the tour on Saturdays at 3pm (please see Sex and the City Tour auf Deutsch on the calendar), the other scheduled SATC tours are only conducted in English at this time. Since so much of the tour is visual, however, visitors from countries like Japan, Germany, France, Spain, and plenty of others have enjoyed the tour just the same!

What type of bus is used?
The tour is conducted on a closed coach bus. It is heated in the winter and air conditioned in the summer.

Is there assigned seating on the bus?
Seating is first come, first serve. If you have a number of people in your party that want to sit together, you should make sure to arrive 15-20 minutes early. Guests that arrive late or right at the starting time are much more likely to have to split up their group.

Are food and drink included on the tour? Can I bring my own?
A cupcake is provided on the tour. We will also stop at one of the bars used on the show where cosmos and other drinks will be available for purchase. If you would like any additional food or drinks, feel free to bring something of your own if it is neat and you're sure to remove all garbage from the bus. Alcohol is completely prohibited on the bus.

Are the buses handicapped accessible?
Yes, but you need to contact On Location Tours directly before booking your tickets to arrange a wheelchair accessible bus, if needed. Buses are equipped with on-board restrooms. Buses are not equipped with lap or shoulder belts or harnesses. We are committed to providing accessible tours to persons with disabilities and are able to provide accessible vehicles for passengers with mobility impairments. Notice of the need for an accessible vehicle at least 24 hours in advance is strongly recommended so as to guarantee the timely provision of an accessible vehicle. The wheelchair lifts can accommodate up to approximately 600 pounds total. However, If you will be using a fold-up wheelchair and will be traveling with someone who can provide assistance on and off the bus, you do not need to inform us ahead of time as all of our buses have room in the luggage compartment to store it.

Are cameras allowed on the tour?
Yes. While photography and filming are not allowed on the bus portion of the tour, there are some great spots for taking photos and video at our numerous stops along the way.

Can I take luggage on the tour?
The Sex and the City Tour is conducted on a coach bus, so limited storage space is available. Please keep in mind that there will be several stops of up to 15-20 minutes each, where we will be leaving the bus. If you are not comfortable leaving your belongings on the bus during this time, you might want to reconsider bringing them.
Back to Top

We are here to help:

Don’t take any chances with your trip. Whether you need assistance booking, helpful details for you to be prepared, or need to make a change, our knowledgeable and helpful customer support team is prepared to assist you.

By Phone: 1-888-590-3015
8 AM to 5 PM Central Time 7 days a week
Email Us:
customerservice@tripster.com
Have General Questions? You can view our FAQs for possible quick answers.